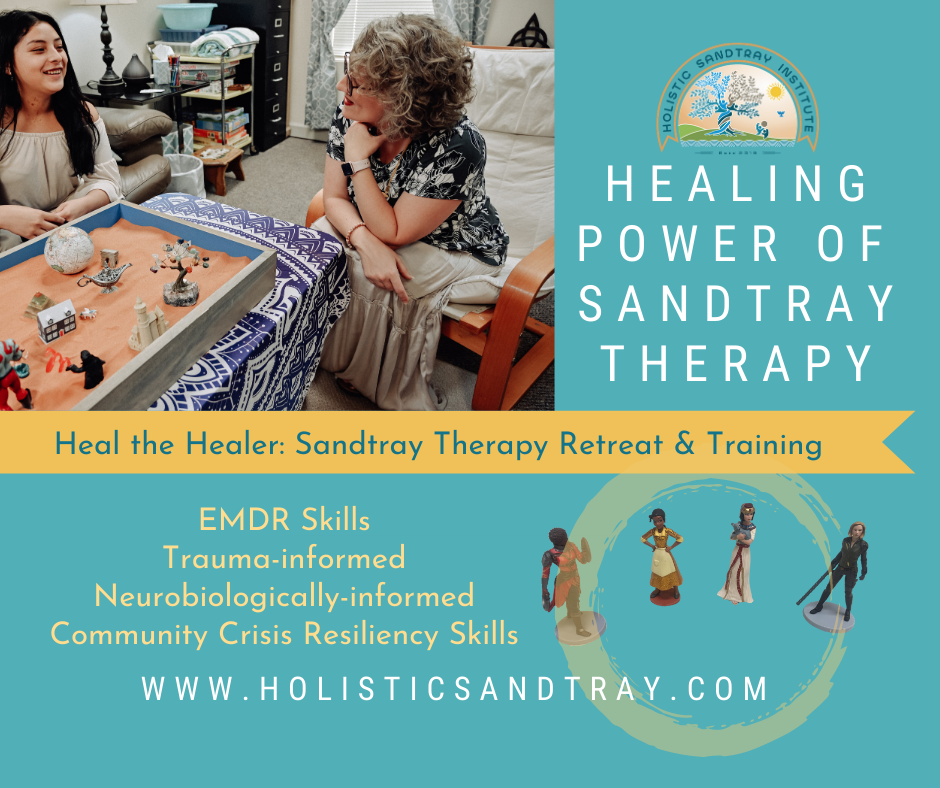 HOW IS THIS TRAINING UNIQUE?

I became a counselor

Because I experienced so many negative experiences

in my own mental health treatment.

Many therapists don't know what to do with Trauma!!

Yet, the majority of clients

I am a Trauma Survivor!!

I am a Trauma Therapist!!

I am a Trauma-Informed Sandtray Therapy Provider!!

Meaning everything I teach is trauma-informed!! 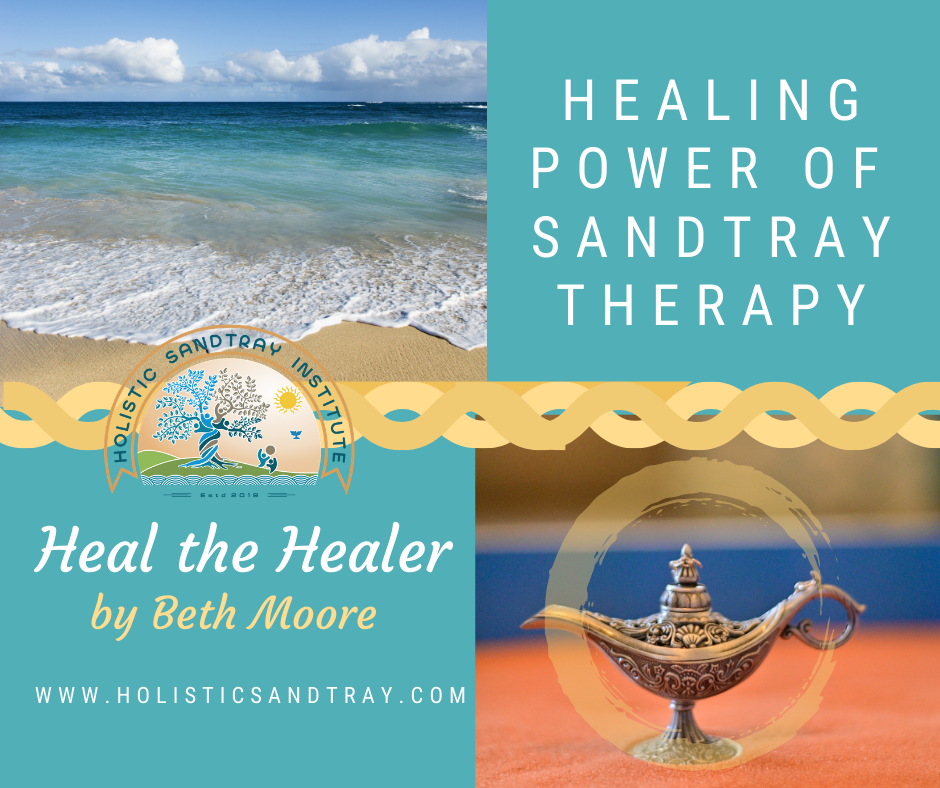 I fell in love with Sandtray

There I sat on the middle of the floor,

with my little miniatures

When my graduate peer

That's when I realized.

Where is my miniature, where am i?

I couldn't believe it!!

I had forgotten myself!!

I was sacrificing myself to help others.

I was forgetting myself.

I could not forget those miniatures,

nor ignore the truth right in front of me.

Especially because I had chosen the miniatures,

and I had built my own world.

I couldn't even argue with my own sandtray.

Sandtray touched my life so much,

that I knew I wanted to specialize in sandtray,

and teach others how to change lives!! 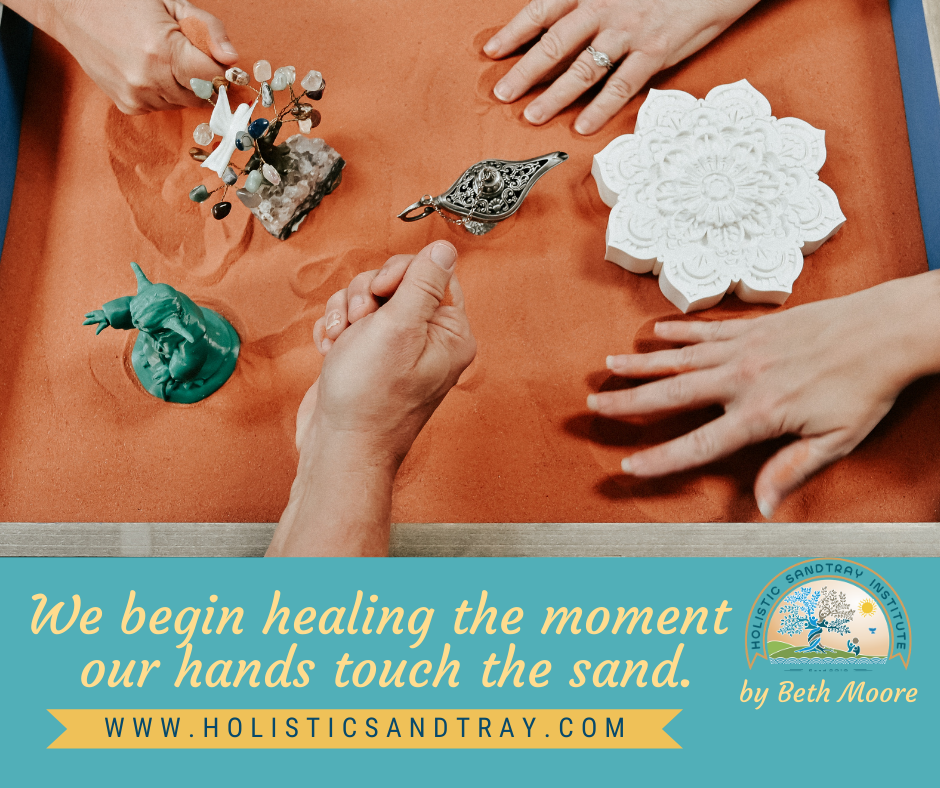 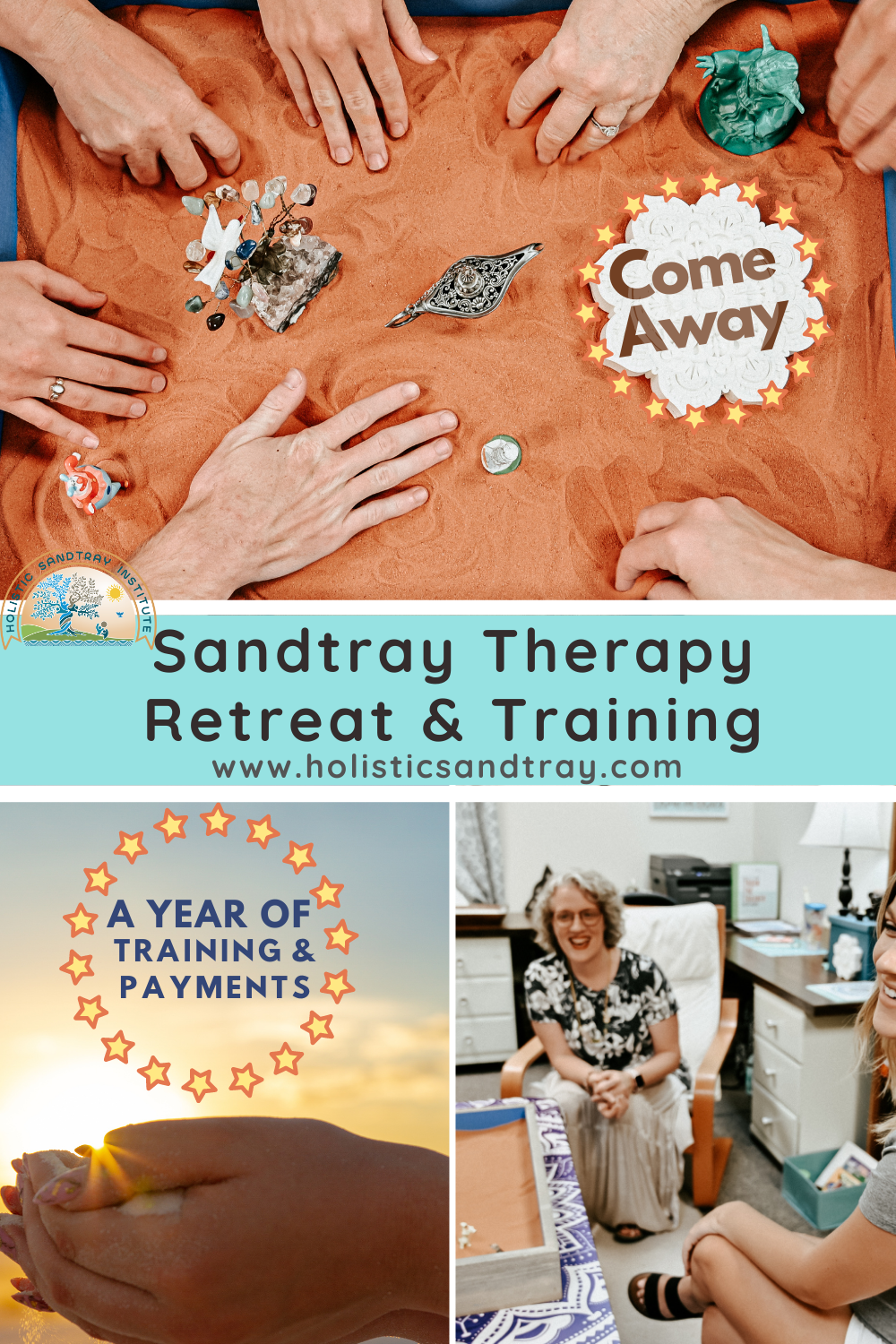 The Transformation was Profound!!

That's when I went to my own training

to be a Credentialed Sandtray Therapist

with Amy Flaherty, my sandtray yoda!!

The TRANSFORMATION was PROFOUND!!

It was the only time in my life

where I could do that many sandtrays

for my own personal growth!!

I jumped in with real struggles.

and over that year,

improvements in my personal life!!

PLUS MY CAREER GOT LAUNCHED

I gained so much confidence

after the sandtray training!!

I know how to help clients who get stuck!!

I learned new sandtray skills for all ages!!

Tons of clients have been transformed because of Sandtray Therapy!

and grown so much in my career!!

Do you ever feel stuck in session?

of how to use Sandtray Therapy

to help your clients get unstuck!

You'll have tools to use

when you feel lost.

It's such an amazing feeling

to have so many tools at your fingertips.

Want to be a Credentialed Sandtray Therapist?

HSI offers a “Heal the Healer”

to reinvigorate the whole person in mind, body, and spirit!!

Want to be reinvigorated?

You can engage in Integrative Sandtray Therapy, 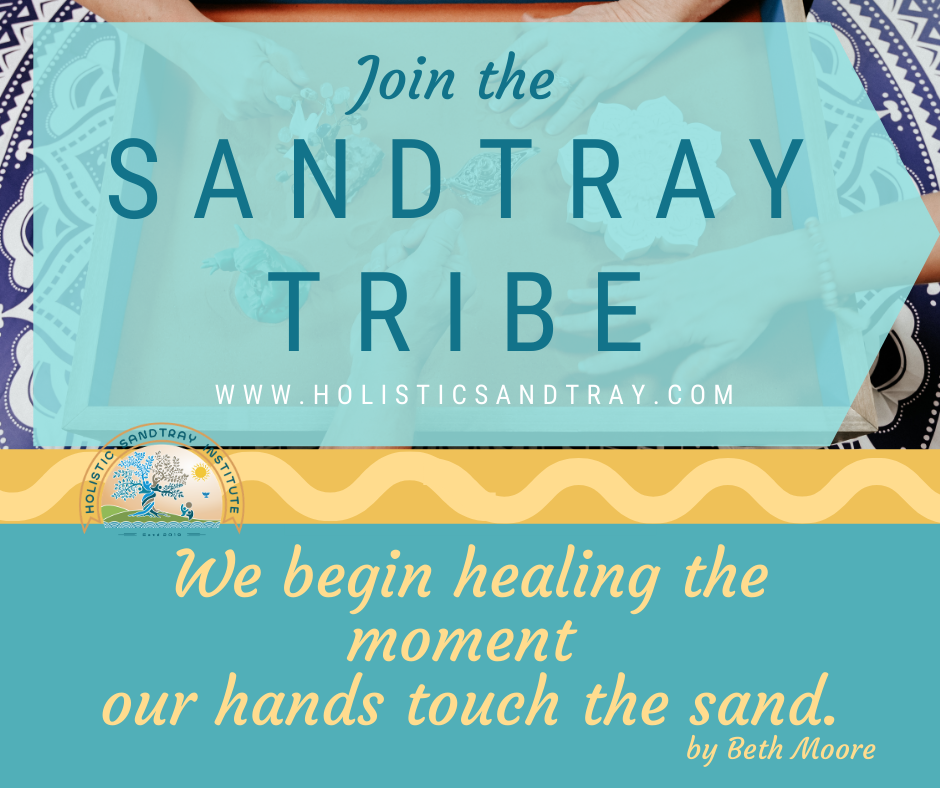 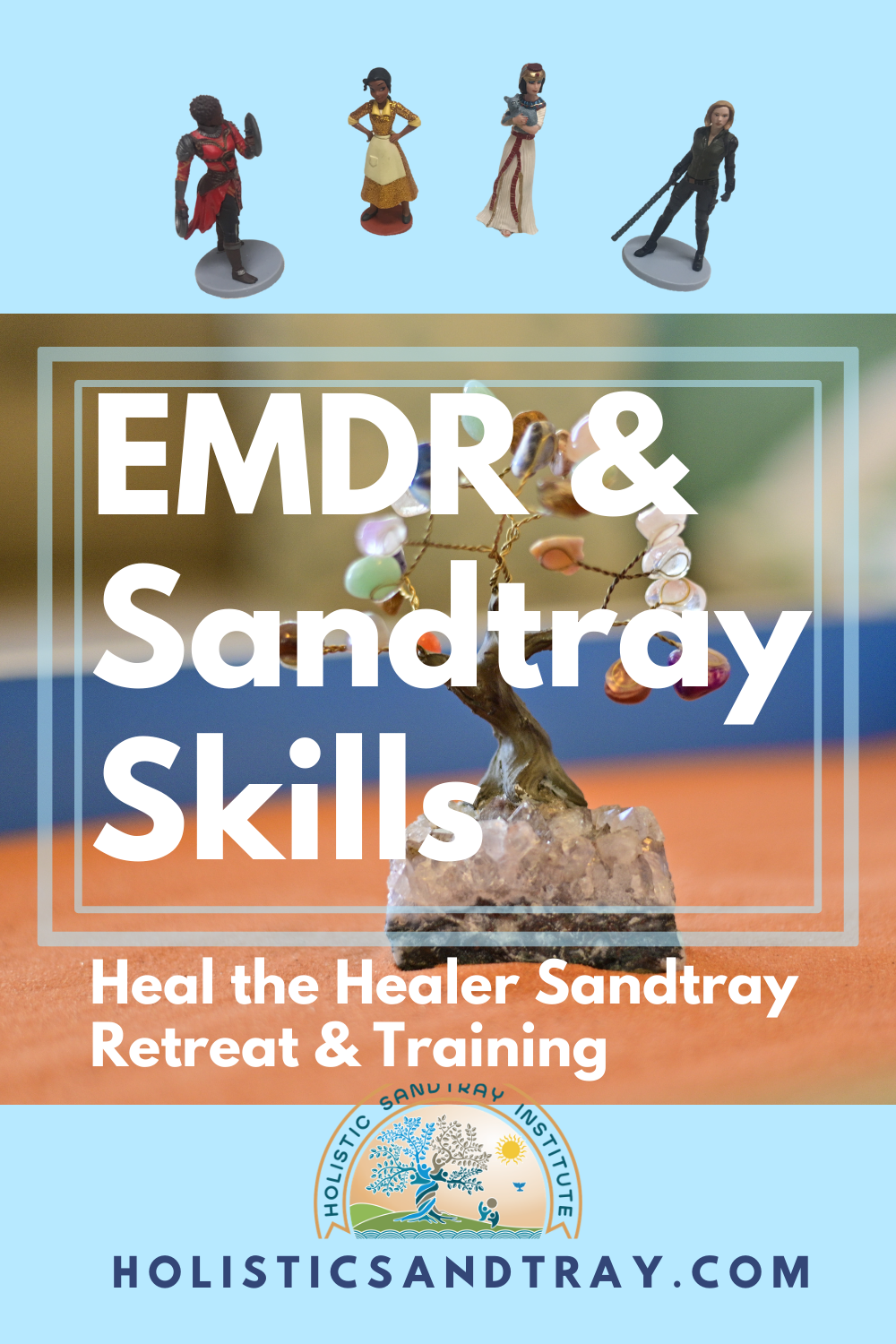 I will be using EMDR tools throughout the Sandtray Therapy ICST training!!

I want to share so many amazing tools to use when you're stuck!!

*This is not a certified EMDR training. I use EMDR tools and techniques in my training.

I created this retreat for you.

Come away & enjoy this personal retreat

You can get all 4 levels of training

to be an Internationally Credentialed Sandtray Therapist (ICST)!

Come away... get specialized & rejuvenated!!

The Purpose of this Course:

with evidence-based practices and

This training is life-changing

and will help you transform 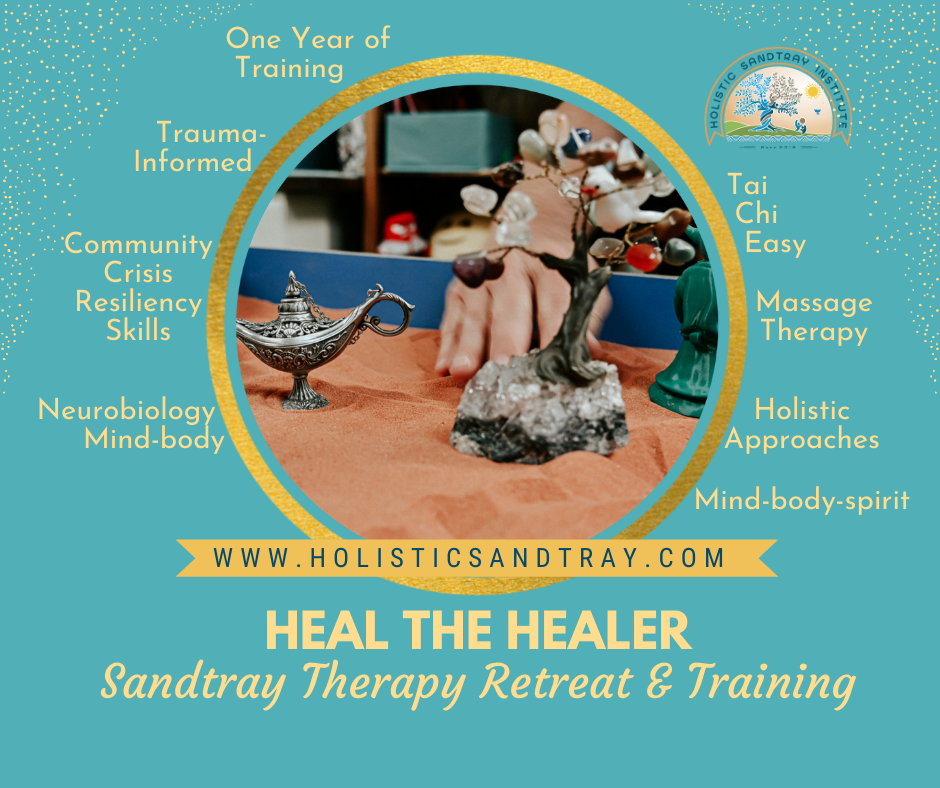 Can't imagine learning all this on zoom?

ICST is a hybrid credentialing program,

with in-person and online training

This training is a multi-sensory learning experience.

for 2 weeks in person (one week each summer),

need to see the dates??

Then we'll meet online between each SUMMER training,

& you get 15 Case Consultation sessions on zoom 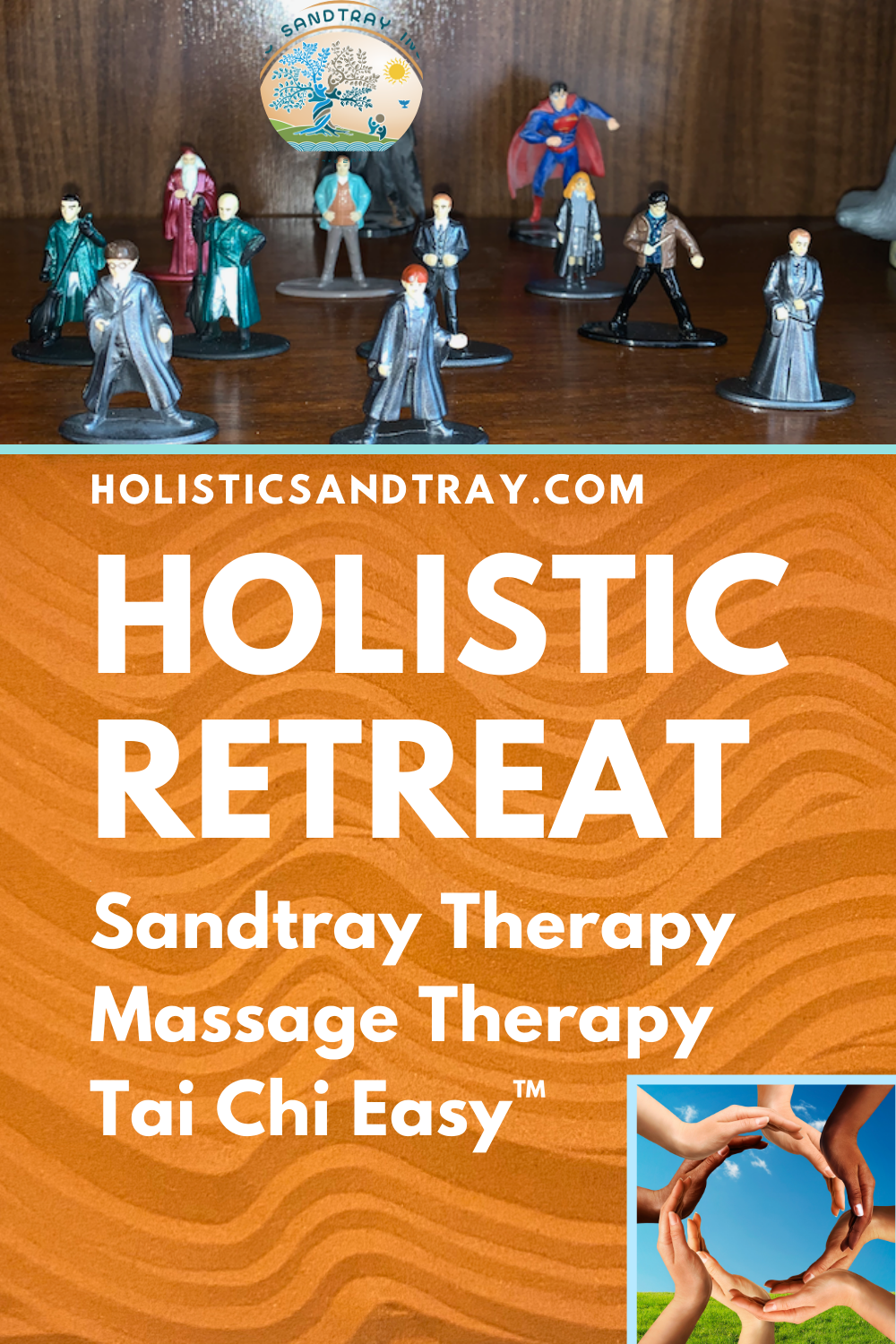 This retreat training includes all 4 levels of training towards being an Internationally Credentialed Sandtray Therapist (ICST)!

You will have the opportunity to complete all Levels 1-4 from an Approved IAST Provider.

The specific levels and objectives are listed below:

You get a whole year of support!!

Seriously, you get a year of support!!

In addition to the 50 hours of in-person CE’s and 15 online case consultation hours, applicants must also complete at least 10 hours of ‘electives,’ which are provided within the ICST online training portal.

Completion of the elective hours may also be obtained at the annual Sandtray Therapy Summit. 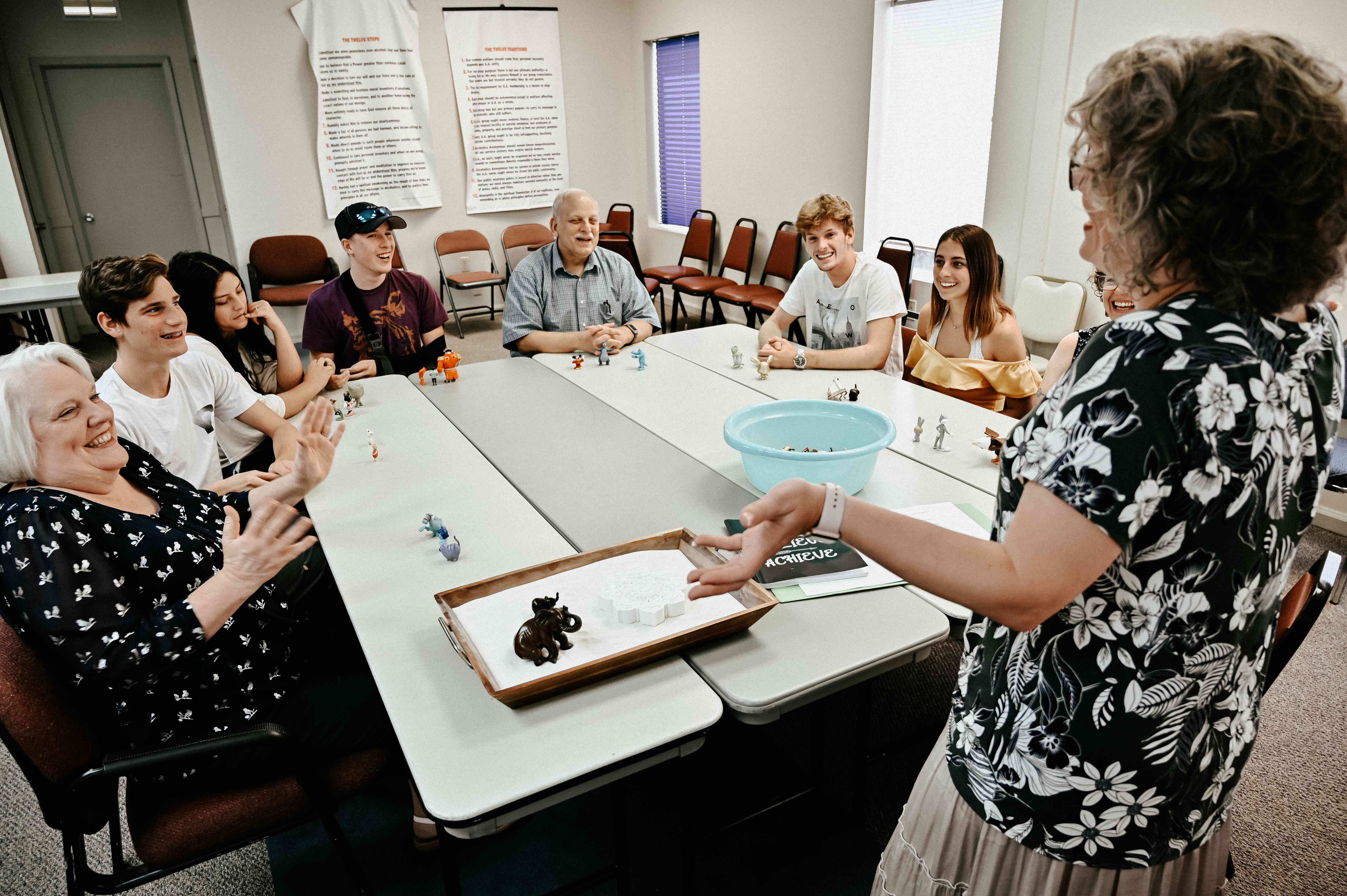 Day 1: Based on the content of this workshop, I am able to:

1. Discuss the history of sandtray work in play therapy.

2. Compare the difference between sandtray and sandplay therapy.

3. Describe the materials needed for sandtray work such as miniatures, sand, and sandtrays.

5. List 20 directives for sandtray work in play therapy provided by the instructor and create others when given case examples from the instructor.

6. Discuss several case studies of adults and explain the process that occurred within the treatment.

7. Describe 10 themes in the sandtray, including those which indicate mental health concerns and healing.

1. Explain developmental issues that occur within sand tray work with children and other special populations.

2. Explain the basics of non-directive play therapy as how it relates to working with children in the sandtray.

3. Apply knowledge from experiencing role play of sandtray work and role play of how this occurs with children and sandtray.

4. Discuss several case studies of children and describe the process that occurred within the play therapy treatment.

5. Explain the latest brain-informed research behind the power of sand tray in play therapy.

6. Identify 3 ways that sandtray can be used in a group and family therapy setting through application of personal group sandtray work.

LEVEL 2: THE NEUROSCIENCE OF SANDTRAY THERAPY

1. Discuss knowledge of the basics of brain structure, especially in how this relates to play therapy.

2. Identify the tenets of interpersonal neuro-biology in a play therapy setting.

4. Explain how different ages work in the sand and play from a brain science perspective.

5. Recite the effect of trauma on the brain and how this affects sandtray therapy.

6. Apply 2 new techniques to help explain the brain structure and to show how it works in the play and sandtray setting.

7. Analyze the Polyvagal theory and how this relates to play and sandtray therapy.

8. Assess sandtrays based within brain science.

9. Demonstrate the importance of implicit vs explicit memories within therapy and play.

10. Use skills to enhance work as a facilitator of sandtray therapy.

11. Utilize the tenets of brain science research into your work in the sandtray.

12. Recite the explanation of how sandtray therapy can be a form of play therapy from a brain-informed method, including the nine pathways of integration.

1. Recite how the brain works through the sandtray and play therapy process.

2. Discuss and analyze several personal case studies as well as those provided by the instructor within the play room.

4. Demonstrate personal work in the sandtray with the trainer and participants.

5. Analyze 2-3 differing theories regarding the use of particular methods of sandtray work in the sand and play therapy

6. Apply techniques in the sandtray and play therapy from both the client and therapist’s perspective.

7. Identify 5-6 processing prompts appropriate for both children and adults in sandtray play therapy

8. Analyze a live demonstration of the sandtray process and play therapy with a non-participant.

10. Design 1-2 techniques to use in the sandtray therapy process from a particular theoretical orientation.

11. Assess and critique personal processing skills in the sandtray while in pair exercises.

12. Explain the importance of personal work within the sandtray as a tool to becoming an effective therapist through an experiential exercises.

13. Discuss how to incorporate sandtray and play therapy into other models of therapy. 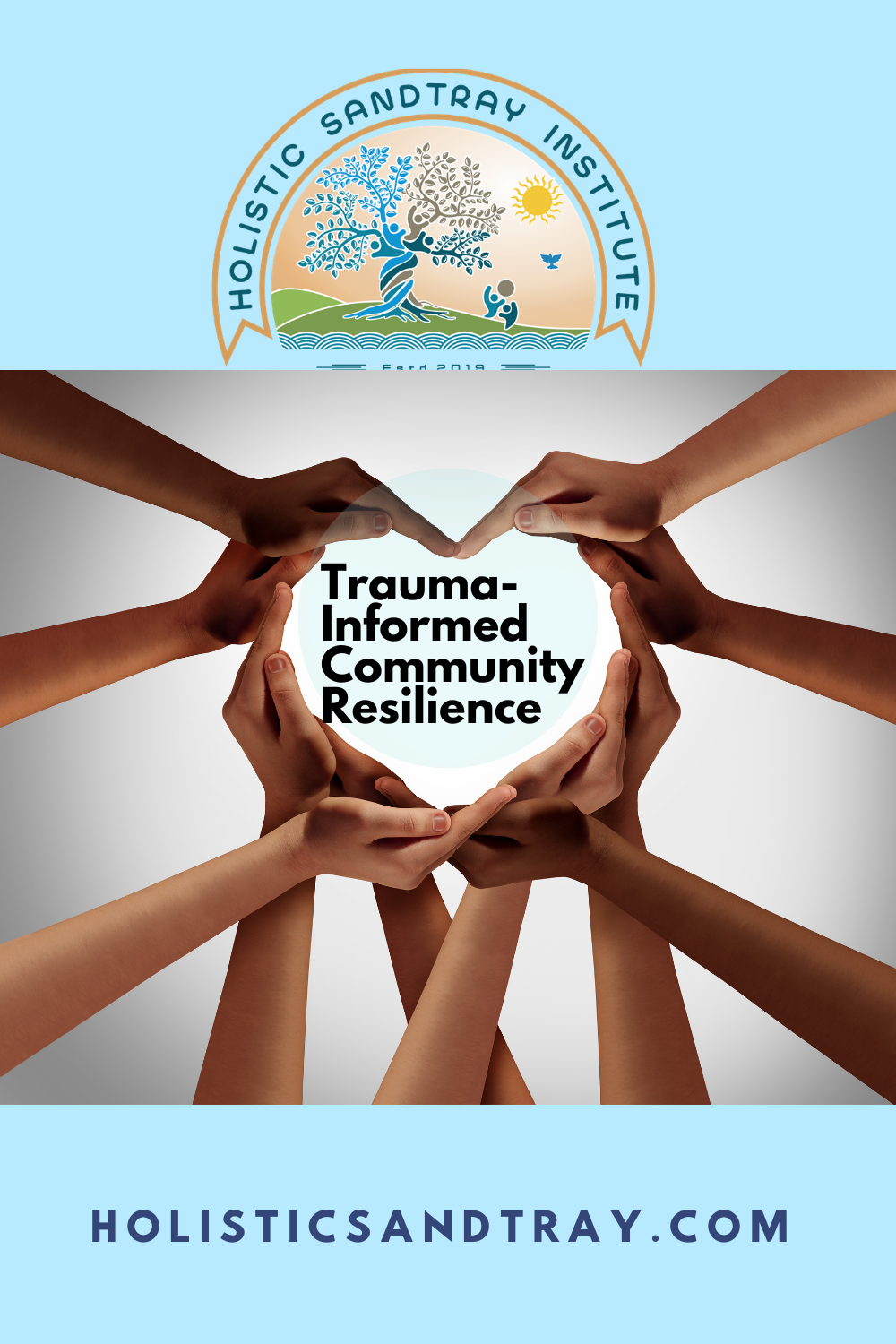 2. Discuss 1 way to calm a dysregulated nervous system in an adult client in a Sandtray & Play Therapy session.

5. Demonstrate 3 trauma-informed practices, such as Mindfulness Grounding to use with adult clients in a Sandtray & Play Therapy session.

6. List 4 categories of trauma-informed miniatures a play therapist should include in a sandtray collection geared to adults in a Sandtray & Play Therapy session.

7. List 3 question prompts or observations that therapists can use in witnessing and/or processing sandtrays with adults who are experience fight, flight, freeze trauma responses in a Sandtray & Play Therapy session.

8. Apply 2 trauma-informed body-based directive activities to use with adults during a Sandtray & Play Therapy session.

10. Identify at least 1 non-directive which is a trauma-informed co-regulating sandtray-play therapy activity to use with adults.

11. Explain the 3 stages of trauma recovery and what it looks like in the sandtray & play therapy session.

Benefits of the Heal the Healer Sandtray Therapy Retreat & Training:

Benefits include so much more than a regular training!!

Come away to the wellness retreat, geared specifically to equip mental health professionals to heal personally in mind-body-spirit.

As therapists, we give so much and find ourselves drained and burned out.

Come away to rejuvenate and find a way to do therapy that is life-giving.

One year of training & support!

One year of monthly payments! 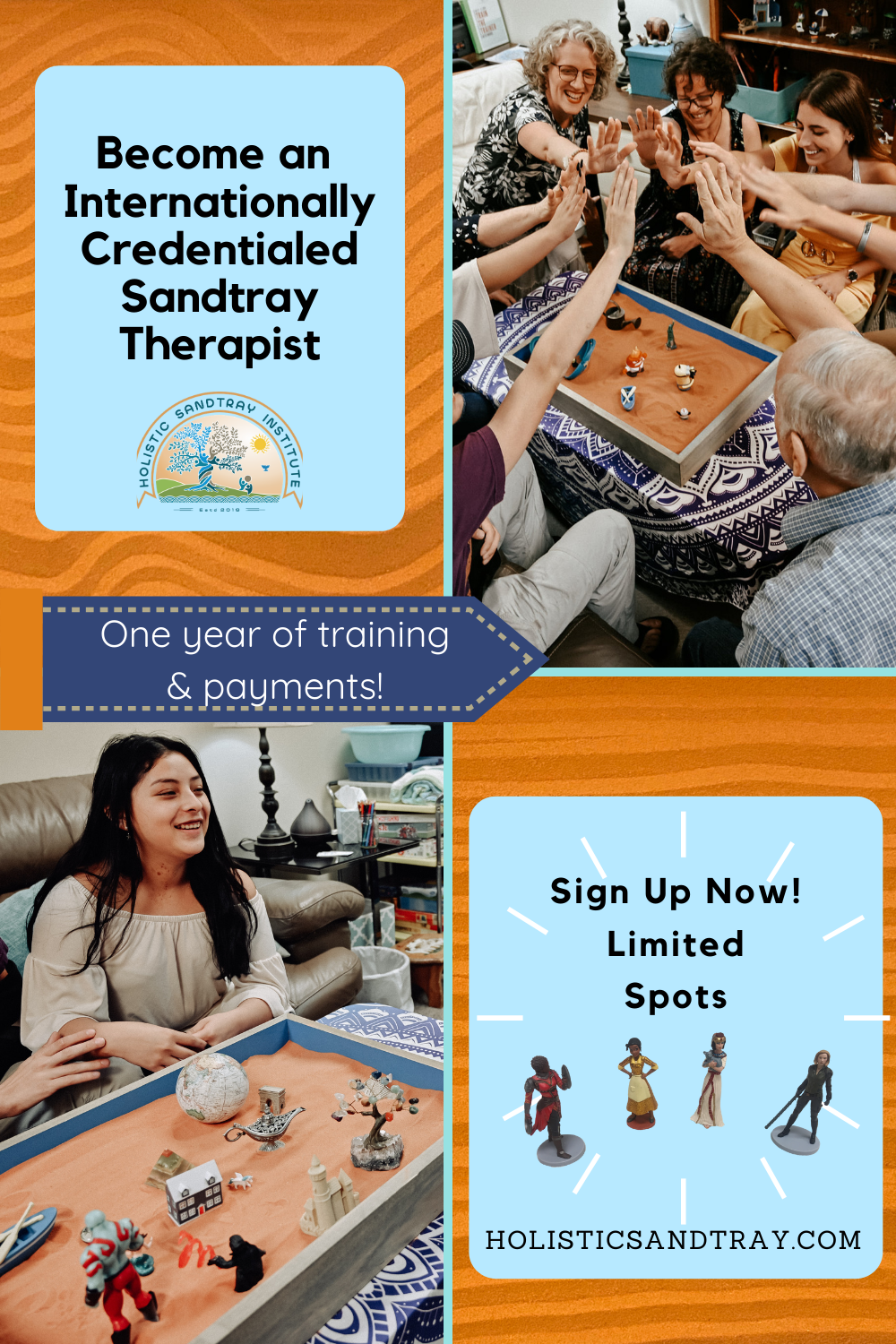 Save Time, Money, and Energy!

This retreat training includes unique mind-body-spirit benefits because it is a personal retreat and a professional development training combined!!

You get both at one location! 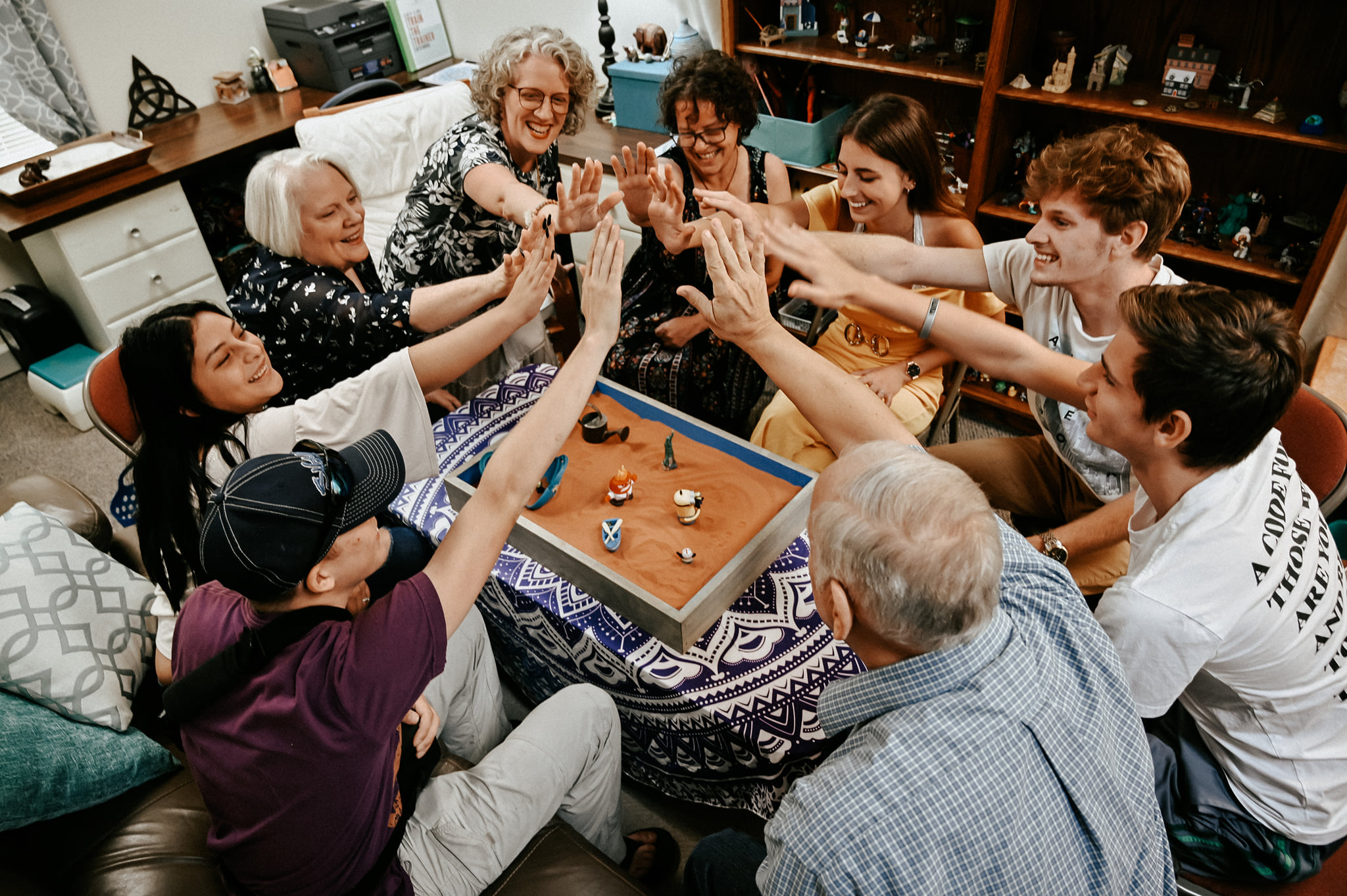 Thanks for submitting your information! Please continue with the checkout process.

Can I get a refund if I'm unhappy with my purchase?

We truly want you to be happy with your purchase.

You can get a full refund within 30 days. After 30 days, you can get a credit towards other trainings and online courses offered by HSI.

Do I have to participate in the training?

Yes, it is important that you participate in the training to get the most out of it. Please read MW & HSI’s Organizational Policies for more information.

How do I get to the training?

Upon purchasing the training, you'll receive further instructions on how to meet us in person and on the onine consultations! Yeah!

Do I need to attend the whole training?

Your presence at the entire training is required. No partial credit can be awarded. There are lots of breaks, as well as many opportunities to move around.

What about disability support?

All venues are ADA compliant or willing to make arrangements.

if you have any questions or concerns.